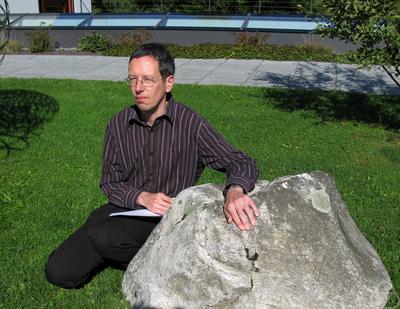 Prof. Jiří Matoušek (with the permission of Archives of the Mathematisches Forschungsinstitut Oberwolfach)

Jiří Matoušek studied at Charles University in Prague where he ranked as a star student from the earliest days. He worked at Charles University in Prague since 1986 till his early decease. Throughout the entire period he was a member of the Department of Applied Mathematics of the Faculty of Mathematics and Physics. He was a full professor at Charles University since 2000. Since 2012 he was also a full professor at ETH Zurich. He was internationally very active, visited many institutions and delivered distinguished lectures, for example, at the European Congress of Mathematicians in 1996 and at the International Congress of Mathematicians in 1998. He was awarded the Prize of EMS for young researchers in 1996 and the Prize of the Czech Learned Society in 2000.

His career started very rapidly. Already as an undergraduate student he obtained original results in combinatorics, graph theory, analysis and logic. Soon after that he solved several well-known "hot" open problems in computational geometry. Almost immediately he became one of the leading experts in the field of discrete and computational geometry. His interests were gradually extended by new and new fields of mathematics and computer science. In the broad spectrum of areas he entered he soon became one of the worldwide authorities. On top of about 200 research papers with very high impact, Jiří Matoušek wrote eight books in different fields. The last one will be published shortly; the others already became renowned textbooks. They appeared or will appear not only in English and Czech, but also in German, Japanese, French, Spanish, Italian and Chinese. In the person of Jiří Matoušek, great talent was combined with an exceptional diligence. It is characteristic of him that, despite of serious illness, he worked on his new texts till the last days.

Professor Jiří Matoušek was an outstanding researcher, but also a brilliant and dedicated teacher. At Charles University and later also at ETH Zurich, he initiated or strongly influenced many courses which are now a standard part of the curriculum. He organized advanced special courses, problem solving workshops and other activities directed on graduate and talented undergraduate students. In 2001 prof. Matoušek created a high-level advanced combinatorial seminar for graduate students at Charles University, which he was running from the beginning till now.

Jiří Matoušek, known as Jirka to his friends, was very special to all who got the privilege to know him closer. He was a loving and proud father who always found time for his family. Also, he was devoted to his students. He was always willing to help students and colleagues by a hint or advise, and always able to slow down the pace of his thoughts to be better understood. Jirka had broad knowledge and overview of science as well as everything in the spotlight of his interests. Whether it was modern literature, history, volcanoes of South America, astronomy, natural wonders of distant corners of the world, quality food or political issues, he would be able and willing to discuss such topics with experts for hours. Jirka shared with his colleagues and friends his ability to discover beauty in ordinary things along the road on his favorite nature walks. He never hesitated to bend down to watch ants, to pick a pebble, or to admire the symmetry of the blossom of a tiny flower. He enjoyed exploring and discovering new geographical areas in different ways as much as new areas and theorems in the realm of mathematics.

We lost a colleague and a good friend who was much respected and loved. We are greatly indebted to him for his significant impact on the life and environment of our department and the whole of our University. He enhanced our teaching and learning, and was a great and recognised moral and scientific authority.

In the name of Jiří Matoušek's colleagues and friends from Charles University,